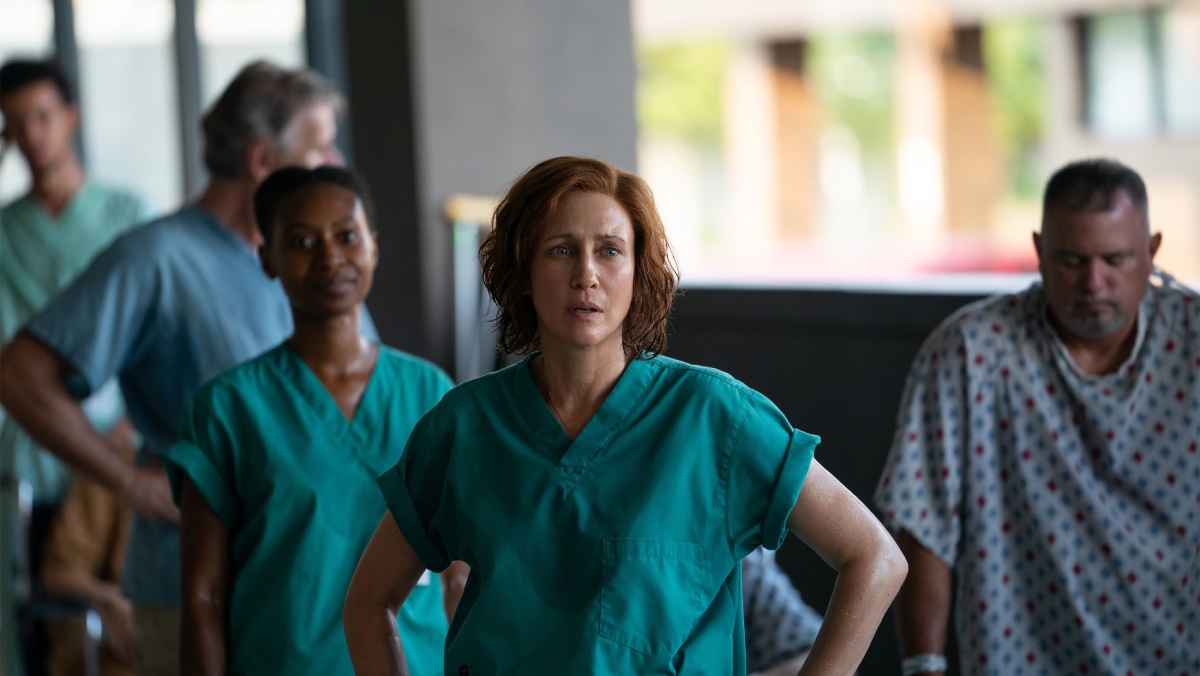 “Five Days at Memorial” is about as bleak as television gets. The series is meant to be that way; based on a non-fiction book by Sheri Fink, it’s set in a hospital during the direct aftermath of Hurricane Katrina. As a medical thriller, it’s extremely compelling. As a true story, it’s almost overwhelmingly punishing and nearly entirely devoid of hope. Still, its suffocating mood isn’t purposeless: “Five Days at Memorial” forces viewers to bear witness to the realities of what being in New Orleans in 2005 likely felt like in a way few other pieces of media ever have before.

The eight-episode series takes place almost entirely at Memorial Medical Center, a hospital that held thousands of patients and staff members when the hurricane hit on August 29, 2005. By September 11th of that year, 45 bodies were discovered in the hospital chapel. The show details both the increasingly unbearable five days staff and patients spent trapped in the hospital after Katrina hit, and the aftermath, which saw the alleged actions of one doctor heavily scrutinized by the public.

Vera Farmiga plays Dr. Anna Pou, portrayed here as a level-headed healthcare provider who reacts more swiftly to the crisis than her boss, administrator, and hospital Incident Commander Susan Mulderick (an excellent Cherry Jones). Still, both are caught off guard when Katrina endures beyond the region’s typical hurricane warnings: in the show’s first episode, Dr. Pou only brings a few rations, while Susan is shocked to scan the hospital’s emergency manual and find no plan for flood evacuation. What follows is a slow yet nearly complete breakdown of society outside the hospital walls, while healthcare workers indoors struggle to maintain patients’ dignity and safety despite increasingly abysmal circumstances.

“Five Days at Memorial” is never as interested in laying blame as it is in helping audiences understand, in real ways and via vividly textured scenes, exactly what it may have felt like to be in this unimaginable situation. It humanizes both patients and staff members, but more than anything else, it builds a steadily crushing sense of dread by portraying the combined weight of each and every detail that made the situation at Memorial go so wrong. The elevators don’t work. Now the air conditioning doesn’t work. Now, the ventilators don’t work. The corporate offices aren’t helpful. The coast guard doesn’t seem to be coming. There are gunshots in the night. It’s death by a thousand disheartening cuts.

As effective as “Five Days at Memorial” is, it’s the kind of series that can reasonably only be endured once. By Episode 5, which marks the last and most deadly day in the hospital, it feels as if the series has reached a level of grimness few others can compare to. It feels as if “Titanic” were entirely climax, or as if Frank Darabont’s take on Stephen King’s existential fable “The Mist” got stuck on a loop in its last five minutes. Except, unlike the latter, it’s a true story, which makes it all the more anguish-inducing.

With “12 Years A Slave” writer John Ridley and former “Lost” showrunner Carlton Cuse at the helm, “Five Days at Memorial” is able to pull off its story with a tremendous sense of visual scale. Although the action centers on just a single medical center, the show also successfully recreates the imagery of an entirely flooded New Orleans. Directors and editors use a mix of methods to create a sense of realism, combining actual archival news footage tracking the situation with a special effects recreation of both the storm itself and the levee failure that came afterward.

The series does lose some power during its tricky third act, as it attempts to delve into the investigations into hospital workers while neither vilifying nor lionizing them. It could have benefited from tightening up, as its last three episodes almost entirely focus on the public’s understanding – or lack thereof – of what happened inside the hospital during the crisis.

The show’s presumably somewhat fictionalized version of Dr. Anna Pou is a sympathetic if slightly unreadable figure throughout the early episodes. Yet later, when she calls the investigation into her conduct the most “exquisite torture” soon after we’ve seen her patients and colleagues endure genuinely torturous conditions, it’s a judgment that feels thoughtlessly selfish. Instead of bringing her motivations into sharper focus, the show makes them muddier in the eleventh hour. The series never fully reckons with the contradictions that seem to exist between Dr. Pou and a doctor, yet also it lingers on them too long to be satisfied with ambiguity.

“Five Days at Memorial” is decidedly better at reckoning with the multi-level failure of the U.S. government and infrastructure that made Katrina so deadly. As a natural disaster story, this would be plenty harrowing. Yet, the reason the show is so unshakeably effective is because it seems to acutely recognize that Katrina was, in the end, also a man-made disaster. Breakdowns in coordination and communication between parts of the government, corporations, and even the hospital itself all had astonishing real-world consequences. Never a series to overdo its hopeful gestures, “Five Days at Memorial” relays its characters’ abject disappointment simply: by flipping the bird at an Air Force One plane as it refuses to land in storm-ravaged New Orleans.

“Five Days at Memorial” is not an easy watch. In fact, it’s one of the toughest. It’s a show that almost begs viewers to leave – because as safe, secondary witnesses to someone else’s tragedy, we can if we want to. Yet that choice gets at the central ethical dilemma of the series itself, because in the end, “Five Days at Memorial” is about those who help each other, those who abandon one another, and the disturbingly murky gray area in between. If you can stomach its unadulterated despair, it’s also a powerfully told story that’s impossible to forget. [B]

“Five Days at Memorial” debuts on Apple TV+ on August 12.